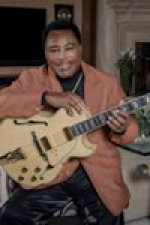 Find the best George Benson concert tickets at Symphony Hall, Birmingham. The legendary George Benson has sold millions of records world-wide and thrilled audiences everywhere. The live shows will feature George Benson's masterful guitar playing, and Benson and his band will perform his Greatest Hits from his impressive back catalogue - which includes such classics as Give Me The Night, Lady Love Me (One More Time), Turn Your Love Around, Inside Love , Never Give Up On A Good Thing and In Your Eyes and more... Benson's latest album, the critically acclaimed 'Walking to New Orleans', the jazz guitar legend's tribute to both piano-pounding hit machine Fats Domino and the original rock guitar hero and poet, Chuck Berry. This is his 45th album and his first recording since 2013's 'Inspiration: A Tribute to Nat King Cole'.

George Benson tickets: The tabs above allow you to select between links to suppliers and date searching. Click on a supplier's logo to see their details and on the 'buy now' button to see and check the tickets on offer. Meal deals (tickets plus a meal) usually represent excellent value for money. Theatre breaks (tickets plus a hotel room) can provide considerable savings.