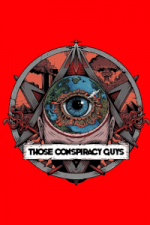 Find the best Those Conspiracy Guys comedy tickets at The Glee Club Birmingham, Birmingham. A comedy, history and True Crime podcast based in Ireland and deals with everything from the out-there conspiracy theories like aliens, time travel, and ancient civilisations to the more grounded, historical and provable conspiracies like political and financial corruption, scientific chicanery and secret government agency shenanigans. Those Conspiracy Guys website.

Those Conspiracy Guys tickets: The tabs above allow you to select between links to suppliers and date searching. Click on a supplier's logo to see their details and on the 'buy now' button to see and check the tickets on offer. Meal deals (tickets plus a meal) usually represent excellent value for money. Theatre breaks (tickets plus a hotel room) can provide considerable savings.