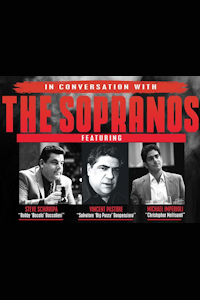 Information for In Conversation with The Sopranos at Bord Gais Energy Theatre (formerly Grand Canal Theatre), Dublin (Event/show). The Sopranos is one of the most iconic TV shows of all time. From 1999 to 2007 the show aired 86 episodes and bagged multiple Emmy and Golden Globe Awards from a list of 111 nominations.
Performers Michael Imperioli, Steven Schirripa, Vincent Pastore.

In Conversation with The Sopranos

Sunday, 27th June 2021.
TOUR DETAILS: In Conversation with The Sopranos
Scroll down for reviews, theatre information and other details.