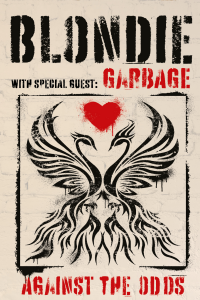 Find the best Blondie - Against The Odds concert tickets at Scottish Exhibition and Conference Centre (SECC), Glasgow. Formed in 1974 by Chris Stein and Deborah Harry, Blondie are one of America's finest punk/rock bands, and were front-runners in the 70s scene. Deborah, the focal point of the band, was joined by Chris on Guitar, Clem Burke on drums, and keyboard player Jimmy Destri They built up support playing small venues in and around Los Angeles and New (playing a large part in the history of the CBGBs), and then went on to support David Bowie and Iggy Pop, before releasing their first album, 'Blondie'. SSE Hydro
Performers Deborah Harry, Clem Burke, Chris Stein, Jimmy Destri, Garbage.

Saturday, 20th November 2021.
TOUR DETAILS: Blondie - Against The Odds
Scroll down for reviews, theatre information and other details.