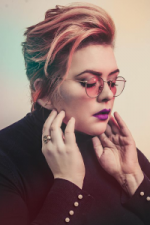 Find the best Jayde Adams - Men, I Can Save You comedy tickets at Gloucester Guildhall, Gloucester. Multi-award winning stand-up, actor, writer & TV presenter. Change is always hard and what better person to lead the men, selflessly by the hand into the new world than TV's Jayde Adams. Multi award-winning comedian and actress, Jayde Adams' critically-acclaimed special was released on Amazon Prime to worldwide applause, was longlisted for an Emmy and has amassed over 156 million views.
Age Advisory: 16+

Jayde Adams - Men, I Can Save You

Saturday, 5th November 2022.
TOUR DETAILS: Jayde Adams - Men, I Can Save You
VENUE DETAILS: Gloucester Guildhall
Scroll down for reviews, theatre information and other details.

Jayde Adams - Men, I Can Save You tickets: The tabs above allow you to select between links to suppliers and date searching. Click on a supplier's logo to see their details and on the 'buy now' button to see and check the tickets on offer. Meal deals (tickets plus a meal) usually represent excellent value for money. Theatre breaks (tickets plus a hotel room) can provide considerable savings.