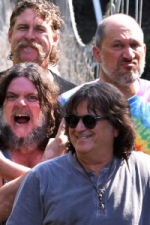 Find the best Hayseed Dixie concert tickets at Gloucester Guildhall, Gloucester. Is there really such a thing as a hillbilly band covering hard rock classics? You betcha. They're called Hayseed Dixie and they play Rockgrass. Kiss, Outcast, Led Zeppelin, Scissor Sisters, Darkness and Aerosmith get the Rockgrass treatment, and it's an irresistable sound! With fiddle, guitars, mandolin and banjo this hillbilly foursome is an awesome live band who have released 8 albums and live DVD entitled 'No Sleep 'til Liverpool'. Hayseed Dixie songs cover the four key elements of any song worth playing; - Drinkin', Cheatin', Killin' and going to Hell! Hayseed Dixie website.

Hayseed Dixie tickets: The tabs above allow you to select between links to suppliers and date searching. Click on a supplier's logo to see their details and on the 'buy now' button to see and check the tickets on offer. Meal deals (tickets plus a meal) usually represent excellent value for money. Theatre breaks (tickets plus a hotel room) can provide considerable savings.