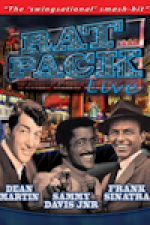 Find the best Rat Pack Live concert tickets at Eden Court Theatre, Inverness. It's the ultimate tribute to legendary Fifties and Sixties phenomenon the Rat Pack - Frank Sinatra, Dean Martin and Sammy Davis Jnr. They were the definition of cool during their Vegas heyday, combining the full sound of big band swing with charisma, panache and swagger. This unique chapter of musical history is superbly recreated by the original Rat Pack Live concert show. Empire Theatre

Rat Pack Live tickets: The tabs above allow you to select between links to suppliers and date searching. Click on a supplier's logo to see their details and on the 'buy now' button to see and check the tickets on offer. Meal deals (tickets plus a meal) usually represent excellent value for money. Theatre breaks (tickets plus a hotel room) can provide considerable savings.