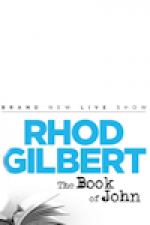 Find the best Rhod Gilbert - The Book of John comedy tickets at Alive Corn Exchange, Kings Lynn. Winner of BBC3's New Comedy Awards at the 2003 Edinburgh Festival. A lot has happened to Rhod in the six years since he last toured. Almost all of it s**t. And just when he thought he'd hit rock bottom, he met a bloke...called John. This show sees Rhod as funny as ever, but like never before. ?The Book of John' is raw, personal and brutally honest; no more lies, no more nonsense. This is Rhod, but different, the same, but not. Come along and see for yourself.
Approximate runtime 1 hour 1 minute (including any interval).