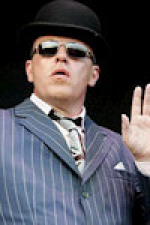 Find the best Suggs - What a King Cnut - A Life in the Realm of Madness concert tickets at Launceston Town Hall, Launceston. Madness front-man. Due to huge popular demand, after his first tour-de-force, smash hit, sell out tour, My Life Story, Suggs is treading the boards again with a brand new show. If the first show was about how on Earth he got there, Suggs: What a King Cnut is about the surprises that awaited him when he did. Vertigo on the roof of Buckingham Palace, nearly blowing the closing ceremony of the Olympics , the embarrassing stuff that happened at Glastonbury. Things have gone a smidge surreal since the Madness frontman was a twelve year old in shorts on the tough streets of North London. Constantly expecting that inevitable tap on the shoulder to hear

Sunday, 2nd October 2022.
TOUR DETAILS: Suggs - What a King Cnut - A Life in the Realm of Madness
VENUE DETAILS: Launceston Town Hall
Scroll down for reviews, theatre information and other details.

Suggs - What a King Cnut - A Life in the Realm of Madness tickets: The tabs above allow you to select between links to suppliers and date searching. Click on a supplier's logo to see their details and on the 'buy now' button to see and check the tickets on offer. Meal deals (tickets plus a meal) usually represent excellent value for money. Theatre breaks (tickets plus a hotel room) can provide considerable savings.