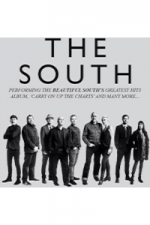 Find the best The South concert tickets at Drill Hall, Lincoln. Formed over 20 years ago, The Beautiful South sold over 15 million albums worldwide and packed out stadiums and arenas throughout that period. They had a string of hit singles such as Old Red Eyes Is Back, Rotterdam, Don't Marry Her, Perfect 10 and Number One single A Little Time. Their greatest hits album, Carry On Up The Charts, was one of the fastest-selling albums in UK history, entering at Number One and staying there for weeks, becoming one of the country's most popular albums ever. Having split in 2007 due to "musical similarities" original Beautiful South members Dave Hemingway & Alison Wheeler (Vocals), Dave Stead (Drums), Damon Butcher (keys), Tony Robinson and Gaz Birtles (brass) have now reformed as The South with the addition of Phil Barton (guitar), and Steve Nutter (Bass), resurrecting the songs and the sounds of this Great British Pop institution by dipping into the Beautiful South songbook as well as writing new material. Its all about the songs! The South website.
Age Advisory: 14+

The South tickets: The tabs above allow you to select between links to suppliers and date searching. Click on a supplier's logo to see their details and on the 'buy now' button to see and check the tickets on offer. Meal deals (tickets plus a meal) usually represent excellent value for money. Theatre breaks (tickets plus a hotel room) can provide considerable savings.