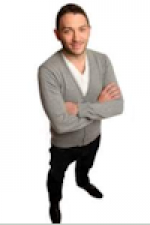 Find the best Jon Richardson - The Knitwit comedy tickets at Lincoln Performing Arts Centre, Lincoln. The British Comedy Award nominee and star of Live At The Apollo and 8 Out Of 10 Cats. Will the recycling be put out on the right day? Who is going to smooth over the top of the margarine? How many lights are on upstairs when everybody is downstairs? Watch Jon pretend that these aren't his foremost concerns as he leaves home on his first tour since the last one.
Age Advisory: 14+