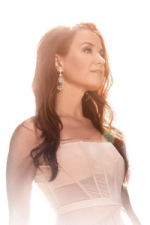 Find the best Sierra Boggess concert tickets at Cadogan Hall, Inner London. Sierra Boggess has been seen on Broadway in the Tony-nominated musical School Of Rock, It Shoulda Been You directed by David Hyde Pierce, the Broadway production of The Phantom of the Opera, the revival of Master Class and The Little Mermaid, for which she received Drama Desk and Drama League nominations and a broadway.com Audience Choice Award. In the West End, Sierra's theatre credits include Les Mise´rables, the 25th anniversary concerts of The Phantom of the Opera at the Royal Albert Hall and her Olivier Award-nominated performance as Christine Daae in Love Never Dies.

Sierra Boggess tickets: The tabs above allow you to select between links to suppliers and date searching. Click on a supplier's logo to see their details and on the 'buy now' button to see and check the tickets on offer. Meal deals (tickets plus a meal) usually represent excellent value for money. Theatre breaks (tickets plus a hotel room) can provide considerable savings.
Information updated within the last 28 days