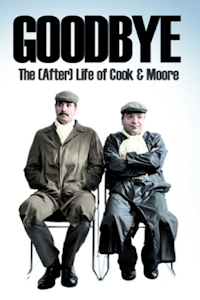 Information for 'Goodbye' The (After) Life of Cook and Moore at Dingwalls, Inner London (Play). March 27 2002. Dudley Moore dies and finds himself in a bar... This must be heaven? Not quite! This bizarre bar is in a comedian's limbo run by his old partner Peter Cook, and they face divine judgment for "Derek & Clive". Not the best of friends in life, the scene is set for showdown as Peter & Dudley have to resolve their differences, confront their past and face their future in Heaven or Hell. Along the way in this darkly surreal comic fantasy, they are visited by other dead comics whose lives they influenced for good or bad, including Peter Sellers, Tony Hancock, Kenneth Williams and Frankie Howerd. Some 40 years after Pete and Dud first hit the public consciousness, Cook and Moore are still a much loved, fondly remembered comedy duo, who paved the way for younger generations of comedy talent. ?Goodbye? offers audiences a nostalgic peek into the Afterlife of the iconic pair, with plenty of laughs, and a host of celebrity characters . Part of the Camden Fringe.

'Goodbye' The (After) Life of Cook and Moore

Sunday, 9th August 2020 to Sunday, 23rd August 2020.Scroll down for reviews, theatre information and other details.