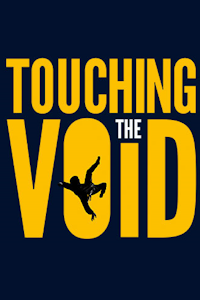 Find the best Touching the Void play tickets at Duke of York's Theatre, West End. Personal change in its most vivid and catastrophic form. "His eyes had been full of thoughts. Pity. Pity and something else; a distance given to a wounded animal which could not be helped." Joe Simpson's memoir Touching the Void, international bestseller and BAFTA-winning film sensation, charts his struggle for survival on the perilous Siula Grande mountain in the Peruvian Andes in 1985.The heart of the novel is Joe Simpson's mental battle as he teeters on the very brink of death and despair in a crevasse from which he can't possibly climb to safety. Also unforgettable in the story is the appalling dilemma of Simon Yates, perched on an unstable snow-cliff, battered by freezing winds and desperate to rescue the injured Simpson, who hangs from a rope below him. Knowing that they will both ultimately fall into the void, he makes the critical decision to cut the rope, forever changing the lives of both of them. What happens when you have to face death squarely in the face and how do you find the strength to crawl back towards life?
Approximate runtime 145minutes (including any interval).
Performers Fiona Hampton, Patrick McNamee, Josh Williams, Angus Yellowlees.
Author Joe Simpson. Producer Bristol Old Vic. Producer Royal Lyceum Theatre Edinburgh. Producer Royal & Derngate Northampton. Producer Fuel Theatre. Adapted by David Greig. Director Tom Morris. Design Ti Green. Lighting Chris Davey. Music Jon Nicholls. Sound Jon Nicholls. Director Sasha Milavic Davies (movement director). Director Jill Green (casting director).

Touching the Void tickets: The tabs above allow you to select between links to suppliers and date searching. Click on a supplier's logo to see their details and on the 'buy now' button to see and check the tickets on offer.