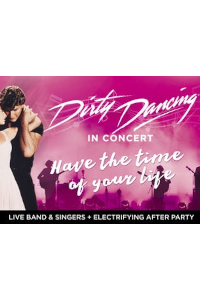 Find the best Dirty Dancing in Concert concert tickets at Eventim Apollo, West End. Relive the timeless love story of Baby and Johnny as global content leader Lionsgate (NYSE: LGF.A, LGF.B), TEG MJR, GEA Live and Karl Sydow announce Dirty Dancing in Concert, celebrating the film's 35th anniversary on a full-size cinema screen with a band and singers live on stage. With a soundtrack that defined a generation, Dirty Dancing in Concert promises to bring a new thrilling experience to the 80s classic! Audiences attending Dirty Dancing in Concert will experience the hit film in a unique and unforgettable way. A complete screening of the digitally remastered film will play as a band and singers perform the songs live, in sync with the film. Stay for the after party and continue to sing and dance along with the band to your favorite Dirty Dancing songs. Set in the summer of 1963, Baby Houseman (Jennifer Grey) and her family vacation to the beautiful Catskills resort, Kellerman's. Intrigued by the staff's dance instructor, Johnny Castle (Patrick Swayze), and the vastly different lifestyle of others, Baby finds herself learning to dance while having the time of her life and falling in love. It is a summer she'll never forget. Dirty Dancing in Concert website.

Thursday, 19th May 2022.
TOUR DETAILS: Dirty Dancing in Concert
Scroll down for reviews, theatre information and other details.

Dirty Dancing in Concert tickets: The tabs above allow you to select between links to suppliers and date searching. Click on a supplier's logo to see their details and on the 'buy now' button to see and check the tickets on offer. Meal deals (tickets plus a meal) usually represent excellent value for money. Theatre breaks (tickets plus a hotel room) can provide considerable savings.
Information updated within the last 28 days