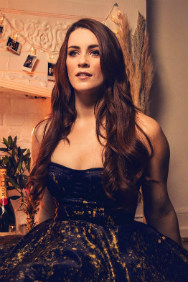 Find the best Lucie Jones - Lucie Jones at Christmas concert tickets at Her Majesty's Theatre, West End. Welsh West End star Lucie Jones rose to fame on The X Factor in 2009 and has gone on to perform in musicals including Les MisÃ©rables, Waitress, RENT, Legally Blonde and Ghost. Now she's preparing to celebrate the festive season with this very special, exclusive headline show Lucie Jones at Christmas. The one-off concert will showcase Lucie's most-loved showtunes and hits from her career, alongside her favourite Christmas songs, accompanied by her live band.

Lucie Jones - Lucie Jones at Christmas tickets: The tabs above allow you to select between links to suppliers and date searching. Click on a supplier's logo to see their details and on the 'buy now' button to see and check the tickets on offer. Meal deals (tickets plus a meal) usually represent excellent value for money. Theatre breaks (tickets plus a hotel room) can provide considerable savings.
Information updated within the last 28 days