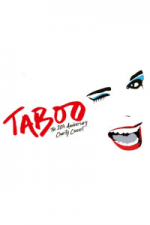 Find the best Taboo - The 20th Anniversary Charity Concert musical tickets at London Palladium, West End. Taboo tells the story of the times, with actors playing out the parts of the bill-topping performers who defined a generation, including Steve Strange from Visage, the indefinable phenomenon that was Leigh Bowery, the one-man entrepreneur extraordinaire Philip Sallon. And then of course, there's Boy George, travelling from squat to superstardom, from rock to rock bottom. The show interweaves some fantastical facts of the 80s with a classic love story of ambition, passion and betrayal. Boy George's award-winning musical Taboo returns to London for one night only to celebrate the 20th anniversary of the show's original production. This star-studded charity concert featuring members of the original cast is in aid of the Terrence Higgins Trust and Shelter.

Taboo - The 20th Anniversary Charity Concert tickets: The tabs above allow you to select between links to suppliers and date searching. Click on a supplier's logo to see their details and on the 'buy now' button to see and check the tickets on offer. Meal deals (tickets plus a meal) usually represent excellent value for money. Theatre breaks (tickets plus a hotel room) can provide considerable savings.
Information updated within the last 28 days