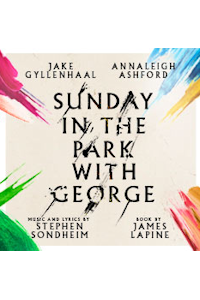 Find the best Sunday In the Park With George musical tickets at Savoy Theatre, West End. A celebration of life and art. It is A Sunday Afternoon in Paris, George, a poor impressionist painter brilliantly captures, the young ladies, couples, children, tramps and their dogs enjoying a Sunday afternoon stroll in the park. As George sketches his lover Dot and the painting becomes a work of art, their relationship falls apart. A 100 years later the painting hangs in an art gallery, admired and discussed, studied and criticised, but what happened to the characters in the picture when it was completed? Immortalised forever in a single moment by the painters brush, but life and art goes on. Postponed due to COVID-19. 2021 dates to be confirmed
Performers Jake Gyllenhall (George), Annaleigh Ashford (Dot).
Design Sondheim. Book by James Lapine. Producer Ambassador Theatre Group Productions. Producer Riva Marker. Producer Jeanine Tesori (in association with New York City Center). Director Sarna Lapine.

Sunday In the Park With George

Sunday In the Park With George tickets: The tabs above allow you to select between links to suppliers and date searching. Click on a supplier's logo to see their details and on the 'buy now' button to see and check the tickets on offer. Meal deals (tickets plus a meal) usually represent excellent value for money. Theatre breaks (tickets plus a hotel room) can provide considerable savings.