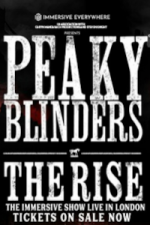 Find the best Peaky Blinders - The Rise - The Immersive Show Live in London performance tickets at The Camden Garrison, Outer London. London. Three gangs, one winner. The Shelbys have called you to a family meeting in Camden. Tommy has a plan and you have a key part to play. Time to make some real money. In the heart of Camden Town, the Shelbys have acquired new headquarters. From here, they will launch their ambitious campaign to take London. And that's where you come in. London, 1921. A dangerous city with threats looming around every corner. Sabini and his Italian gang have hold of the race-courses, and Alfie Solomon's control of Camden is seemingly impenetrable. With the police already in the pockets of their rivals, the Peaky Blinders will need to claw their way to the top through wit and cunning. If Birmingham taught them anything, it's that any race can be fixed, if you know the inside track. Spanning across the timeline of Season 2, you will step into the rich and risky world of the Peaky Blinders. Meeting iconic characters, audiences will be enlisted to take up the charge for the Shelby family as they claim territory across this new city, acquiring information on behalf of the Blinders, placed on covert jobs and delivering secret messages. All the while, they will be tempted by other gangs to betray kin, with promises of rewards for insidious dealings, and fortunes balance on a razor's edge. If you think you know what happens next, think again. Your choices can change the destiny of the Peaky Blinders: the standing in society, and its reputation among the gangs of London. Lives hang in the balance: the cost of choosing the wrong path could have fatal consequences.
Approximate runtime 2 hours (including any interval).

Peaky Blinders - The Rise - The Immersive Show Live in London

Peaky Blinders - The Rise - The Immersive Show Live in London tickets: The tabs above allow you to select between links to suppliers and date searching. Click on a supplier's logo to see their details and on the 'buy now' button to see and check the tickets on offer. Meal deals (tickets plus a meal) usually represent excellent value for money. Theatre breaks (tickets plus a hotel room) can provide considerable savings.
Information updated within the last 28 days