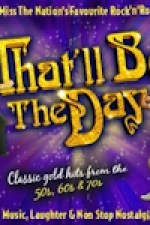 Find the best That'll Be The Day - 35th Anniversary Show concert tickets at Palace Theatre, Mansfield. This hugely entertaining rock 'n' roll spectacular features an all new line up of knock-out hits from the 1950s, 60s and 70s, mixed with loads of zany comedy routines to produce a show with a real good party atmosphere. From humble beginnings, the show has grown into a "must see" attraction all over the UK, coming up with a new production from its multi-talented cast year after year. Unashamedly nostalgic, That'll Be The Day takes its audience on a rollercoaster ride through the 'golden' age of Rock and Roll and Pop. The show has been described as 'Relentlessly Entertaining', mixing brilliant vocals and superb musicianship with impersonations and hilarious comedy routines. Guaranteed a great night out, this is truly the best 'feel good' show on the road. You won't be disappointed! That'll Be The Day - 35th Anniversary Show website.
Approximate runtime 2 hours 45 minutes (including any interval).
Age Advisory: 8+

That'll Be The Day - 35th Anniversary Show tickets: The tabs above allow you to select between links to suppliers and date searching. Click on a supplier's logo to see their details and on the 'buy now' button to see and check the tickets on offer. Meal deals (tickets plus a meal) usually represent excellent value for money. Theatre breaks (tickets plus a hotel room) can provide considerable savings.