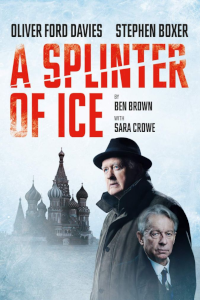 Find the best A Splinter of Ice play tickets at Theatr Clwyd, Mold. Moscow 1987, the cold war begins to thaw. After declining his offer for more than 30 years England's greatest living novelist Graham Greene is finally permitted to meet his old MI6 boss, Kim Philby, Britain's greatest ever spy... and traitor. Under the watchful eye of Kim's Russian wife, the two men set about catching up on old times. With a new world order breaking around them how much did the writer of The Third Man know about Philby's secret life as a spy? Did the Red Spy Philby betray his friend as well as his country? ...and who is listening-in in the room next door?
Approximate runtime 90minutes (including any interval).
Age Advisory: 12+
Performers Oliver Ford Davies, Stephen Boxer.
Author Ben Brown. Company The Original Theatre Company. Director Alan Strachan. Director Alastair Whatley. Design Michael Pavelka. Music Max Pappenhiem. Sound Max Pappenheim. Lighting Jason Taylor. Director Ellie Collyer-Bristow (CDG - casting director).

A Splinter of Ice

Monday, 21st June 2021 to Saturday, 26th June 2021.
TOUR DETAILS: A Splinter of Ice
Scroll down for reviews, theatre information and other details.

A Splinter of Ice tickets: The tabs above allow you to select between links to suppliers and date searching. Click on a supplier's logo to see their details and on the 'buy now' button to see and check the tickets on offer. Meal deals (tickets plus a meal) usually represent excellent value for money. Theatre breaks (tickets plus a hotel room) can provide considerable savings.