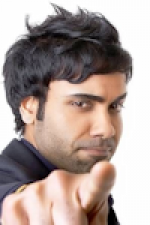 Find the best Paul Chowdhry - Family-Friendly Comedian (no children) comedy tickets at Royal & Derngate, Northampton. The UK's most controversial Asian comedian, Paul Chowdhry, is seen as the bad boy entertainer of the Brit comedy scene and regarded as the outspoken nemesis of wholesome traditional Asian comics.