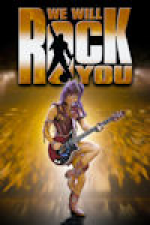 Information for We Will Rock You at Theatre Royal, Norwich (Musical). It is the future ... this place was once called Earth and globalisation is now complete ... all the kids wear the same styles, watch the same films and think the same thoughts. Rock and Roll has been outlawed for centuries and all musical instruments have been banned. Its a bland, uniform, safe Ga Ga world on Planet Mall with nothing to disturb "The Company" who run everything. Except that the legend persist that somewhere there are still instruments to be found and that the mighty axe of a great and hairy guitar god lies buried deep in rock. But only a hero could possible find and wield the axe and the Bohemians need to find him (or her!) before The Company's Ga Ga Cops do because they will drag him (or her!) before the Killer Queen and banish him beyond the Seven Seas of Rhye. Where is this axe hero? Where is the Hairy One's lost axe? Where is the place of living rock?<br><br>With the fabulous music of Queen and words adapted by Ben Elton this is a terrific, high power, show which will have you stomping and calling out for more. We Will Rock You website.
Approximate runtime 2 hours 45 minutes (including any interval).

Monday, 20th June 2022 to Saturday, 25th June 2022.
TOUR DETAILS: We Will Rock You
VENUE DETAILS: Theatre Royal
Scroll down for reviews, theatre information and other details.