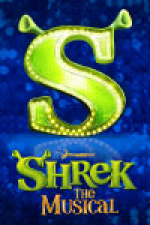 Information for Shrek - The Musical at Pitlochry Festival Theatre, Pitlochry (Musical). Shrek is the story of the swamp-dwelling ogre who, in a faraway kingdom, embarks on a life-changing adventure in order to reclaim the deed to his land. Joined by a wise-cracking donkey who won't shut up, this unlikely hero - not a handsome prince - fights a fearsome dragon, rescues the feisty Princess Fiona and learns that real friendship and true love aren't only found in fairy tales. With all-new songs, and an old favourite in "I'm a Believer", this spectacular stage musical brings to life the film's cast of dysfunctional characters and the accompanying subversive fun. The stage musical is based on the story and characters from William Steig's book Shrek! and the Oscar-winning DreamWorks Animation feature film Shrek, the first chapter in the series of irreverent fairy tales.