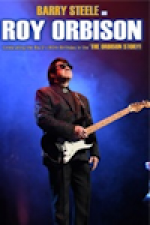 Find the best The Roy Orbison Story - Barry Steele and Friends concert tickets at Spa Complex, Scarborough. Barry Steele puts the rock back into Roy Orbison as he opens the show accompanied by our 5 piece band, as we instantly convey you back in time to the 1960's when the big O toured the UK, Barry not only sounds like the man , he looks like him too with the trademark dark rimmed glasses and 60's style look as he introduces his special guests on stage, reminding many that Roy Orbison hosted his own TV show in the 60's. In the second set all you need to do is just imagine it is the 30th of September 1987 and Roy Orbison is in the Coconut Grove Nightclub in Los Angeles recording the sensational Black and White Night, relive this golden evening as Barry Steele effortlessly transports you back to what was arguably one of Roy Orbison's greatest performances. With a rollicking set including Ooby Dooby, Mean Woman Blues, and Uptown, plus the soaring vocals of Barry Steele as effortlessly performs the Classics, Only the Lonely, Crying, and Blue Angel, right through to Orbison's later hits California blue, and You Got it, and of course the Traveling Wilburys whose music also features in the show.

The Roy Orbison Story - Barry Steele and Friends tickets: The tabs above allow you to select between links to suppliers and date searching. Click on a supplier's logo to see their details and on the 'buy now' button to see and check the tickets on offer. Meal deals (tickets plus a meal) usually represent excellent value for money. Theatre breaks (tickets plus a hotel room) can provide considerable savings.