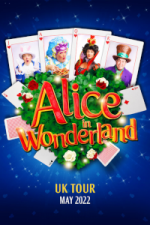 Information for Alice in Wonderland at Town Hall Theatre, Stourbridge (Panto). Alice follows the white rabbit down his hole into Wonderland and the adventure begins. Join Alice as she falls down the rabbit hole and finds herself in the most peculiar place she's ever seen! She'll need to have her wits about her as the evil, but hilarious, Queen of Hearts is after the secret recipe to create the best Jam Tarts for her tea party! Alice will need all the help she can get from her Wonderland friends including the Mad Hatter, the White Rabbit and Molly the Dormouse to stop the evil Queen from stealing the recipe from her sister - Celia Suet - the most fabulously dressed cook you've ever clapped eyes on! Their adventures will take them on a magical journey through Wonderland as they fight good against evil and discover the power of true friendship. But will they make it to the tea party in time? You've got an invitation too - come along this may half term and find out!