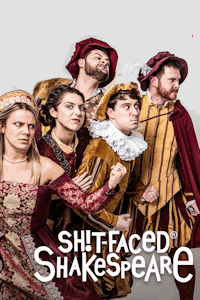 Find the best Shit-Faced Shakespeare - Romeo and Juliet play tickets at Grand Theatre, Swansea. Five actors perform each night on a rotational basis. An entirely serious production of A Midsummer Night's Dream with the addition of an entirely shit-faced cast member. Hilarious, raucous and completely interactive, the show has entertained thousands of music festival goers since 2010, completed a sell-out run at the Edinburgh Fringe Festival in 2012. With a genuinely drunken professional actor selected at random every night, no two productions are ever the same. The energy and danger of the show are further compounded by allowing the audience control of when, what and how much the actor drinks during the show. Previous productions have featured highlights such as partial male nudity, Ill-fated crowd surfing, transvestitism, simulated sex acts, unconsciousness, partial female nudity, Justin Timberlake impressions, actual acts of a sexual nature and ?battle yodelling'. All presented within the confines of one of the finest works in the literary canon.
Approximate runtime 60minutes (including any interval).
Age Advisory: 16+