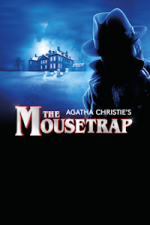 Information for The Mousetrap at Grand Theatre, Swansea (Play). Opened at the Ambassadors Theatre in London on 25 November 1952. The World's Longest Running Play! A group of people gathered together in a remote part of the countryside discover there is a murderer in their midst. The question is which one of them is the guilty party. The Mousetrap website.
Approximate runtime 2 hours 20 minutes (including any interval).
Age Advisory: 10+ May contain smoke and haze effects.