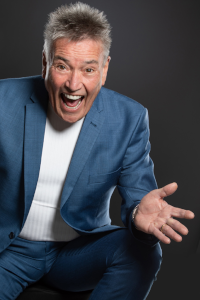 National treasure, and without doubt one of Britain's most talented and best loved comedians, Billy Pearce emerged from the fertile talent fields of Butlins in the mid 1980's. Multi Award winner Billy, has won just about every comedy award going, including a British comedy award, Solo comedian of the year, and Best television comedy newcomer at the London Palladium.
Age Advisory: 18+

Between 2nd September 2022 and 17th September 2022 this tour will visit 4 venues in; Barnard Castle, Carlisle, Stockport and Romford.
Current and future dates only.
This production has been listed in 3 venues since 20th February 2021.

You can embed this tour information on your own website by adding a single line of code to a page and using the Qtix code T01247258748 - for details see our Embed Information page.