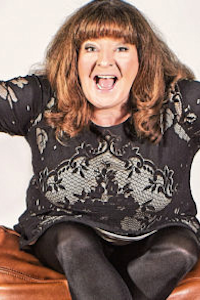 Janey Godley has been described as the most outspoken female stand-up in Britain. She is a regular guest on BBC Radio 4's Just a Minute, Saturday Live and Loose Ends, writes a weekly column for the Scotsman and an award-winning blog that receives half a million hits per week, and her autobiography, Handstands in the Dark, was a UK top ten bestseller. She's won international awards and receive rave reviews worldwide for her hilarious, sometimes shocking, but always true stories. NEWS ALERT... Janey Godley and her soup pot are on tour. "Frank Open the door" get ready! So, tell all the Sandras, Big Frank and all the lassies fresh from Zumba to grab the soup pot and get ready for the "Queen of Scottish Comedy" coming to a town near you! Live voice overs and stand-up like you've never een before. Check out some hilarious patter from Big Tereeza in Torremolinos, Boris and his bawjaws and see Nicola up on the big screen with all the latest patter. Janey Godley - Janey Godley's Soup Pot Tour website.
Approximate runtime 120minutes.
Age Advisory: 16+

Between 24th October 2021 and 8th April 2022 this tour will visit 9 venues in Dunfermline, Inner London, Edinburgh, Glasgow, Barnard Castle, Colchester, Farnham, Southampton and Salford. Current and future dates only. This production has already been seen in 16 venues since 14th February 2020.

You can embed this tour information on your own website by adding a single line of code to a page and using the Qtix code T0928153439 - for details see our Embed Information page.