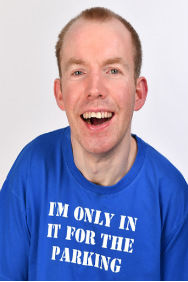 Following the unprecedented success of his appearance on the final of 'Britain's Got Talent 2018' (he only went and won it), BBC New Comedy Award winner and star and writer of BBC Radio 4's comedy series, 'Ability'. He won the BBC New Comedy Award in 2014 and his TV and Radio credits have included The One Show (BBC One), Voice of The People (BBC Three), BBC At The Edinburgh Festivals (BBC iPlayer), Ability (Radio 4) and, of course, Britain's Got Talent (ITV). The Britain's Got Talent winner will poke fun at his life living as a disabled person in a post-apocalyptic world, as he tries to cope with the fame and fortune since his memorable victory. From the highs of meeting 50% of The Chuckle Brothers to the lows of being called âhim off The X Factor', and everything in between.

Between 22nd April 2021 and 28th May 2022 this tour will visit 14 venues in Cheltenham, Bristol, Burnham-on-Sea, Sevenoaks, Leeds, Barnard Castle, Cardigan, Northallerton, Peterborough, Dorking, Exeter, Barnstaple, Salford and Newcastle upon Tyne. Current and future dates only. This production has already been seen in 6 venues since 8th March 2021.

You can embed this tour information on your own website by adding a single line of code to a page and using the Qtix code T01936199919 - for details see our Embed Information page.