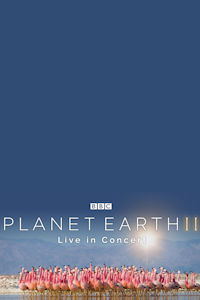 Planet Earth II Live in Concert, from BBC Studios and the acclaimed BBC Natural History Unit that created TV sensations, Blue Planet II and Dynasties, has announced a UK & Ireland arena tour for Spring 2020. Experience sensational footage from the BAFTA and EMMY? award winning BBC series which guarantees to bring audiences closer to the planet's spellbinding animals, landscapes and wildlife dramas than ever before. Planet Earth II in Concert website.

Between 18th March 2022 and 27th March 2022 this tour will visit 7 venues in Cardiff, Bournemouth, Outer London, Leeds, Manchester, Birmingham and Glasgow. Current and future dates only. This production has already been seen in 5 venues since 19th March 2021.

You can embed this tour information on your own website by adding a single line of code to a page and using the Qtix code T1532831097 - for details see our Embed Information page.