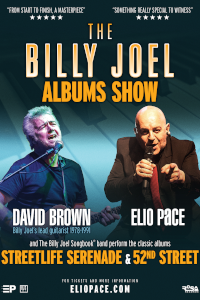 Billy Joel tribute show. Elio Pace and his band return, this time performing two more Billy Joel classic albums in their entirety, STREETLIFE SERENADE and 52nd STREET. David Brown played lead guitar in Billy Joel's band from 1978 until 1991 and also went on to record and tour with many music icons including Paul McCartney and Simon and Garfunkel.

Between 10th March 2022 and 16th March 2022 this tour will visit 2 venues in Newport and Glasgow. Current and future dates only.

You can embed this tour information on your own website by adding a single line of code to a page and using the Qtix code T057493705 - for details see our Embed Information page.