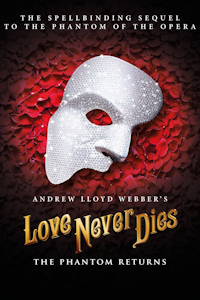 Sequel to The Phantom of the Opera. Love Never Dies is set ten years after the conclusion of the original story. The Phantom has escaped to New York with Madame and Meg Giry and found success in Coney Island as a magician and entertainer. When he builds a new opera house, he persuades his old ingenue Christine Daae, now a huge star and married to her old flame Raoul, to sing for him once more...

Between 26th September 2020 and 24th October 2020 this tour will visit 2 venues in Leicester and Manchester. Current and future dates only.

You can embed this tour information on your own website by adding a single line of code to a page and using the Qtix code T1264299856 - for details see our Embed Information page.