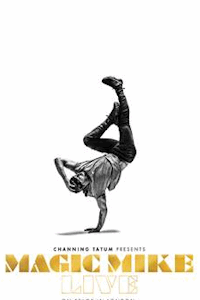 Based on the smash hit films Magic Mike and Magic Mike XXL. Guests will enter Magic Mike's mythical Club Domina and marvel as a group of extraordinary artists perform a 360-degree dance and acrobatic spectacular in front of, behind, and above their audience. Sexy dance routines intertwined with one-of-a-kind acts will be presented by a wildly diverse cast of performers from around the world for this hot new production. Made for a woman's gaze but directed at a woman's heart, Magic Mike Live will transport you to a world where the only thing hotter than the men are their unforgettable performances. Empowering and exhilarating, Magic Mike Live is a scorching, immersive, dance and acrobatic spectacular that will leave you breathless. Whether you're looking for the perfect date night or an unforgettable girls night out, with this show, the woman is always on top.
Approximate runtime 1 hour 30 minutes.

You can embed this tour information on your own website by adding a single line of code to a page and using the Qtix code T1528460437 - for details see our Embed Information page.