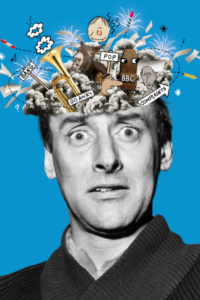 "I'm not acting crazy. I'm the genuine article."It's the booming fifties, and Britain is in the clutches of Goon mania as men, women and children across the country scramble to get their ear to a wireless for another instalment of The Goon Show. While Harry Secombe and Peter Sellers get down to the serious business of becoming overnight celebrities, fellow Goon and chief writer Spike finds himself pushing the boundaries of comedy, and testing the patience of the BBC. Will Spike's dogged obsession with finding the funny elevate The Goons to soaring new heights, or will the whole thing come crashing down with the stroke of a potato peeler?
Approximate runtime 2 hours 10 minutes.
Age Advisory: 10+ Contains strong language, references to suicide, loud bangs, strobe lighting and the use of prop cigarettes and gun

You can embed this tour information on your own website by adding a single line of code to a page and using the Qtix code T576033380 - for details see our Embed Information page.