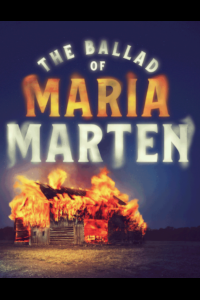 A classic real-life murder mystery thrillingly retold for a contemporary age. Summer, 1827. In a red barn Maria Marten awaits her lover. A year later her gruesomely murdered body is found in a grain sack, barely identifiable. Maria's story sent shock waves throughout the country. Her murder became national news, inspiring writers and film makers down the ages. The sort of gruesome tale that had all the hall marks of a classic crime drama - a missing body, a country location, a disreputable squire and a village stuck in its age old traditions. But in all this hysteria Maria's own story gets lost. Until now. Hal Chambers and Beth Flintoff's spine tingling retelling rediscovers her story, bringing it back to vivid, urgent life. The Ballad of Maria Marten website.
Approximate runtime 120minutes.

Between 8th February 2022 and 23rd February 2022 this tour will visit 3 venues in Colchester, Inner London and Malvern. Current and future dates only. This production has been listed in 9 venues since 11th February 2020.

Dates for The Ballad of Maria Marten (Play) tour

You can embed this tour information on your own website by adding a single line of code to a page and using the Qtix code T02116957182 - for details see our Embed Information page.

Receive email notifications of changes to The Ballad of Maria Marten.