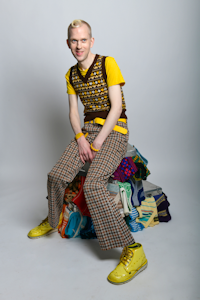 Robert White wowed the judges and viewers alike with his fast-paced comedy routines when he made the finals on this year's Britain's Got Talent. He is now set to bring all that fun you saw on the TV live across the country as he announces his debut UK tour: The Tank Top Tour. With a suitcase full of his trademark vests, Robert will be travelling the UK with his unique, musical stand-up!