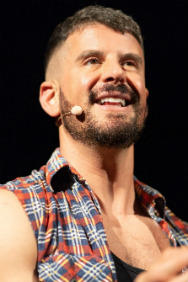 T1668490406
Riot Act is a powerful brand new verbatim theatre piece created especially for the Queer Season. 'You know what's strange, I felt safer on the night of the riots, on the sidewalk in front of Stonewall, than I did in my own home town'. 'I'm a drag queen. I want to live. I want to survive. As an older person, I'm sixty five now, I couldn't give a f*cking shit'. 'In London, the idea of 'safe sex' was; don't sleep with Americans. James was older; a mature student. He was twenty two years old when he died'. Playwright and performer Alexis Gregory interviewed one of the only remaining Stonewall survivors, radical-drag icon Lavinia Co-Op and prominent 1990's London ACT UP AIDS activist Paul Burston and in this solo theatre piece, ?channels' sex decades of queer history. Hard-hitting, provocative, tender, truthful, funny, political and personal, these are stories of queerness, activism, addiction, sex, drag, community, conflict, youth, ageing, fierce queens and a Hollywood diva. ?Riot Act' is the follow up piece to Gregory's recent critically acclaimed sell-out run of ?Sex / Crime' (The Glory). His previous work includes ?Slap' (Stratford East / Channel 4 / Concrete in Shoreditch) and ?Safe' (Soho Theatre / London Theatre Workshop / Norwich Theatre Royal). He presents ?Riot Act' in association with Team Angelica.Archive :: production:T1668490406, play:S1905784020, venue:V1545109680
Current production:Tour/Production