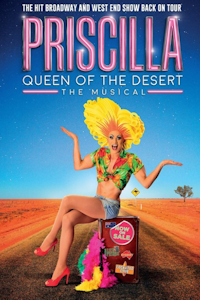 T0335820163
Sydney drag queen Mitzi and her two fish-out-water friends, Felicia and Bernadette, are heading west across the desert to Alice Springs in their battered old bus. They are each on their own personal journey of discovery, but together they put on a show unlike anything the locals have ever seen before. The musical is fashioned around disco hits including I Love the Night Life, I Will Survive, Shake Your Grove Thing and Finally. Based on the Oscar-winning film.Archive :: production:T0335820163, musical:S0877850554, venue:V626
Current production:Tour/Production