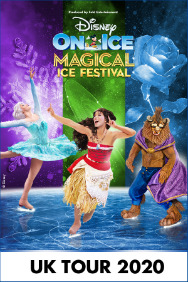 Enter a world of adventure featuring daring tales from across the kingdom in Disney On Ice presents Magical Ice Festival. Join fearless wayfinder Moana and the greatest demigod that ever lived, Maui, on an action-packed voyage to return the stolen heart of Te Fiti. Journey alongside royal sisters Anna and Elsa, the hilarious snowman Olaf, rugged mountain-man Kristoff and his loyal reindeer Sven from Disney's Frozen. Dive