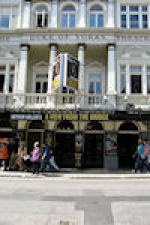 T707816418
The story focuses on an Anglo - Pakistani family in 1970's Salford. It's a time of long hair, glam rock and flares. Chip shop owner, George Khan, wants his children to keep their culture and tradition but his kids want to be part of the modern world. The boys want disco music, the latest fashions and girls; Sajit wants to live in his parka and Meena doesn't want to wear saris. Their Dad is insisting on arranged marriages, dutiful children and respect, while their English Mum wants to give the kids space and to keep the peace - which is where the trouble starts. East is East is the hilarious result of two cultures colliding. This touching comedy was a hugely successful stage play and later made into the enormous international smash hit film. Winner of 1997 Writers' Guild Best West End Play award.Archive :: production:T707816418, play:S3123, venue:V392