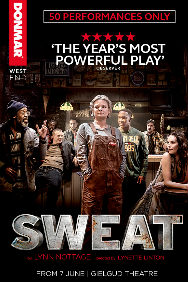 T189358086
In 2011, Lynn Nottage began spending time with the people of Reading, Pennsylvania: officially one of the poorest cities in the USA. During the following two years, she dug deep into the forgotten heart of middle America, finding a city divided by racial tension and the collapse of industry. Sweat is the Pulitzer Prize-winning play that Lynn Nottage wrote following her experience.Archive :: production:T189358086, play:S0223402115, venue:V395