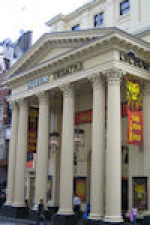 T323819343
Deep in the snowbound mountains of Alsace a savage crime remains unsolved. Fifteen years on the assassin, Mathias, is now rich and respected, but tormented by guilt. Driven by desperation to escape detection and consumed by conscience, Mathias hangs suspended between sanity and terror, as nightmarish visions, conjured from the depths of his mind, administer justice. The Bells overwhelmed audiences in 1871 with its sheer passion and tragic force.Archive :: production:T323819343, play:S863147576, venue:V422