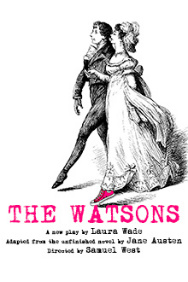 T01210730885
What happens when the writer loses the plot? Emma Watson is nineteen and new in town. She's been cut off by her rich aunt and dumped back in the family home. Emma and her sisters must marry, fast. If not, they face poverty, spinsterhood, or worse: an eternity with their boorish brother and his awful wife. Luckily there are plenty of potential suitors to dance with, from flirtatious Tom Musgrave to castle-owning Lord Osborne, who's as awkward as he is rich. So far so familiar. But there's a problem: Jane Austen didn't finish the story. Who will write Emma's happy ending now? Based on her incomplete novel, this sparklingly witty play looks under the bonnet of Jane Austen and asks: what can characters do when their author abandons them?Archive :: production:T01210730885, play:S636020657, venue:V341546307