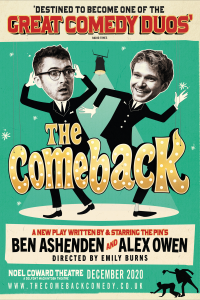 T2047974747
Up-and-coming comics Alex and Ben have been booked in the warm-up spot for a beloved but fading double act's comeback tour. Neither duo are delighted to be playing to a sparse crowd in a sleepy, seaside town, but when it's revealed that a Hollywood director is in the audience, both acts glimpse a final chance for their big break. Cue sabotage, mistaken identity and full on farcical mayhem, as the performance descends into a desperate battle for the limelight. With the action alternating between offstage and on, and the tone between Noises Off and Morecambe and Wise's old-school charm, this is a warm-hearted, joyful, and dazzlingly funny new comedy.Archive :: production:T2047974747, play:S693810434, venue:V380

Each night Ashenden and Owen will be joined on stage by a celebrity guest star. All will be revealed on the night!