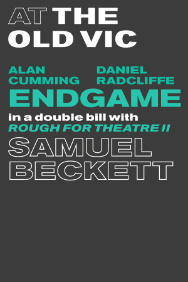 T0437071386
Set in a bare, partially underground room, Beckett's 1957 existentialist play finds a wheel-chair bound Hamm passing the time by ordering his servant Clov to move him around, fetch objects and peer out the window for signs of life, while his bin-dwelling parents Nagg and Nell look on.Archive :: production:T0437071386, play:S3158, venue:V402