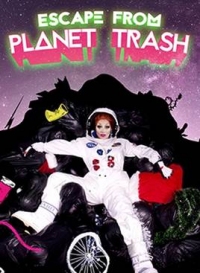 As the countdown to Christmas begins, the planet faces a new danger, an impending solar flare that threatens to obliterate Planet Trash, and a discarded weapon the Intergalactic Government is desperate to retrieve. All that stands between Planet Trash and complete annihilation is a crack team of unlikely queer space explorers, and Ginger Johnson, the last remaining resident of the doomed planet, who is refusing to return home. Can they escape the planet before it explodes, can they find the weapon and disarm it, and will they make it home for Christmas? In their own distinct style, Sink The Pink and Ginger Johnson return to Pleasance Islington for five weeks of queer, campy, Christmas fun. Featuring drag queens, comedy, aliens, giant space spiders, and a live score, Planet Trash is destined to become this year's Christmas must-see!