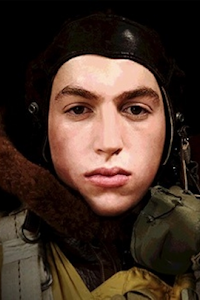 T01000369663
Inspired by the experiences of Bob's father, Sergeant J J Baldwin. This gripping true story of a terrifying night-time Lancaster Bomber raid in WWII uncovers the triggers of the lifelong legacy that traumatised those airmen who survived. Confined in the claustrophobic aircraft the young crew struggle to survive. They avoid searchlights and flak, witness fellow airmen blown out of the sky and plunge into zero-gravity corkscrew manoeuvres to dodge enemy aircraft. As they unleash their deadly cargo onto the city below, the wireless operator agonises about the real cost of their mission.Archive :: production:T01000369663, play:S01487201792, venue:V276