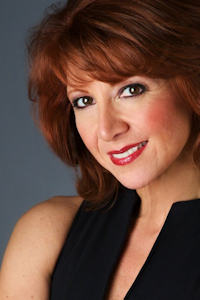 T0
Bonnie Langford has packed a wealth of experience into her outstanding career, with success in theatre, television, film and radio in both Britain and America, and in her latest role of Carmel Kazemi in the BBC TV drama serial, 'EastEnders'. Bonnie made her debut in the West End at the tender age of seven, and has gone on to play roles in Gypsy, Dirty Rotten Scoundrels, Cats, The Pirates Of Penzance, Peter Pan - The Musical, Me And My Girl and Spamalot, to name just a few. She garnered more rave reviews for her portrayal of ?Roxie Hart' in Chicago both on Broadway and on the North American national tour, a role which she ?rst played at the Adelphi Theatre and the Cambridge Theatre, London. Bonnie has also appeared in the hit musical film Bugsy Malone and many British television series including Just William, The Lena and Bonnie Show, the award-winning Hot Shoe Show, Hotel Babylon, Marple, The Catherine Tate Show, The Spa and as the 22nd assistant to BBC TV's Doctor Who.Archive :: concert:S1866043312, venue:V327